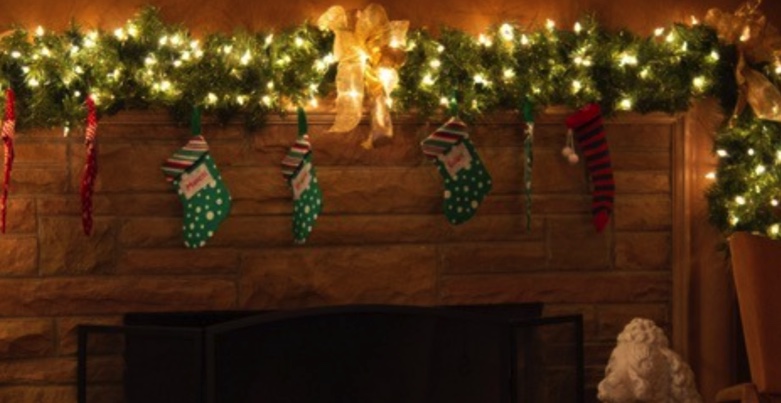 Verse 1: Twas the night before Christmas, when all through the house

Not a creature was stirring, not even a mouse.

The stockings were hung by the chimney with care,

In hopes that St Nicholas soon would be there.

Verse 13: He spoke not a word, but went straight to his work,

And filled all the stockings, then turned with a jerk.

And laying his finger aside of his nose,

And giving a nod, up the chimney he rose!

The poem by Clement Clarke Moore – known as Twas the Night Before Christmas popularised the idea of Santa Claus tumbling down the chimney. It tells a tale of Christmas Eve when the plumptious, cheery Man in Red with a snow white beard, descends down the chimney ‘with a bound’ and a sack full of presents. Then, having had a mince pie and sip of port, Mr Cingle rises back up the chimney after filling the stockings hung on the mantlepiece with gifts galore.

Before the advent of radiators and underfloor heating the flickering flames of an open fire were an integral element of the British living room. A hidden gem that kept the nip of the winter chill at bay. Filled homes with a cosy heat. Radiated light. Provided families with a place to toast marshmallows and roast chestnuts. They helped paint a picture of Christmas for anyone peering in through the window.

It’s quite a different story today in the fast paced world of property investment. The romance of yesterday has been usurped by the desire for space today. Particularly when converting into flats. The idea of holding onto a chimney for Santa is debatable, particularly when you can double up and produce the chic two-in-one lounge kitchenette.

If you are buying, developing or renovating a property with a chimney there’s a choice to make between creating space for modern living or trading in space for yester year charm.

Keeping them or building one into the wall still adds character. Even if a mint condition classic is out of the question, it’s worth thinking about professionally-aged reproductions that typically cost a third of an authentic period piece – but can look just as impressive.

Santa won’t give a jot. He really doesn’t mind. His round the world whistle stop tour on Christmas Eve means he doesn’t have time to linger. Just don’t forget the mince pie and port.

Verse 14: He sprang to his sleigh, to his team gave a whistle,

And away they all flew like the down of a thistle.

But I heard him exclaim, ‘ere he drove out of sight,

‘Happy Christmas to all, and to all a good-night.’